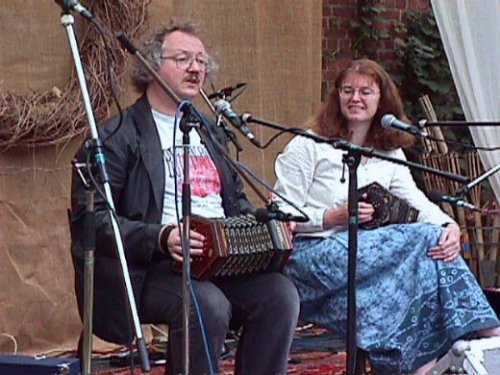 Well, if you've come this far, you probably want to know something about us. Before we start, though, we should tell you that for the time being we are no longer taking bookings, because Anne's greetings card business is requiring too much time and attention from both of us, and in fact is doing very well. If you would like to see her designs, go to Anne Gregson Cards. In the meantime we hope you enjoy the page for what it is, and the CD it describes is still available and is, in the opinion of many, pretty good actually.

If you heard that Chris has had a stroke in March of this year (2003) then I can tell you that at the time of writing (July 2003) I am on the way to making a full recovery. It has had a significant effect on my concertina playing, but time and a lot of practice should sort that too.

We have been singing together for quite a few years now. We sing a mixture of traditional songs from England and America, together with contemporary songs, many written by Anne (an accomplished songwriter and solo performer in her own right, and maker of greetings cards). We both play concertinas: Anne plays the English and Chris the Anglo. Chris has drawn on this joint experience to produce the highly regarded Concertina FAQ, which is just a mouse-click away. We currently have some 10 concertinas between us (I wish they'd breed!) including both trebles and baritones of both systems. We find that having a range of instruments like this enables us to vary our arrangements very widely from song to song.

(For those who are interested, Chris is the fortunate owner of a Dipper baritone anglo, a really superb instrument. Click here if you would like to see some pictures of this). Until recently Chris was also on the committee of the International Concertina Association) until the stroke forced him to step down. They are well worthy of your investigation if you are a concertina player.

At one time or another we have played many of the English folk festivals and been booked at many clubs. In May 1996 we completed our first tour of the US, where we performed at 13 clubs and festivals between Maine and Washington DC. In October 1997 we returned, and had if possible even more fun than last time. Americans seem to like us, which is only fair since we like them too. High points of the second trip included the fall colours in Vermont (oh gosh!), U'n'I Coffeehouse in Springfield MA, Tryworks Coffeehouse in New Bedford MA, some smashing house concerts (especially in Boston and Pittsburgh), and an absolutely brilliant weekend in the company of the Folksong Society of Greater Washington at their Getaway Weekend.

Our third trip in May 1999 was a bit of a shame, really, as we both had colds that badly affected our voices through much of the trip. But we soldiered on, and with the great friendship and helpfulness that was shown to us we were able to complete the trip while only missing one gig. Particular thanks to The Beans, a fine 3-part harmony group from New Bedford who joined us on two of the gigs, and Jerry Bryant of Amherst MA, who came in on a third at very short notice.

In fact, I must show you this. This is an award "For Valor", presented to us by the U'n'I Coffeehouse in Springfield MA. Subsequently, at our gig for the Folklore Society of Greater Washington (an English-style Folk Club night that was great fun, but we were still suffering) they read it out and added their endorsement. 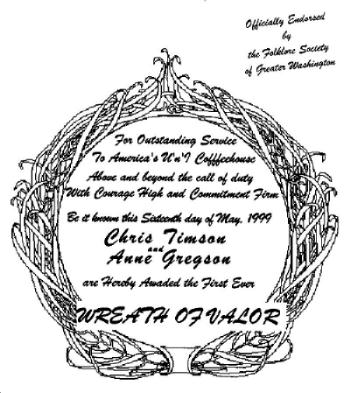 One day we will return to the States, but as yet we don't know when that might be.

In 1998 we performed at our first festival in mainland Europe, at Gutenbrunn near Vienna. That went remarkably well, including our appearance on Austrian television (our first appearance on television, but the second for our concertinas, which were seen in the episode of Local Heroes that featured Charles Wheatstone, the inventor of the concertina). Here we are onstage, Chris having just swallowed the microphone... 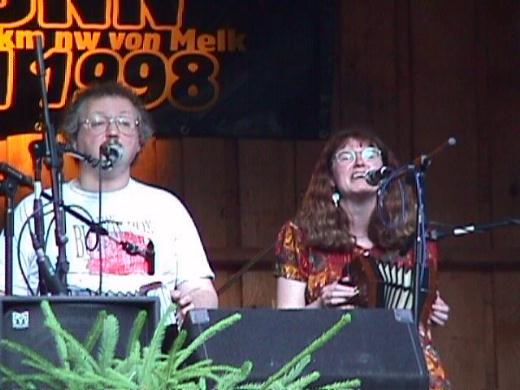 In 1999 we appeared at the Celtic Gallery Folk Festival in Belgium on a weekend in August. That was good fun too, especially the Belgian beer. Chris developed a particular taste for a strong beer called Duvvel, but that's another story. 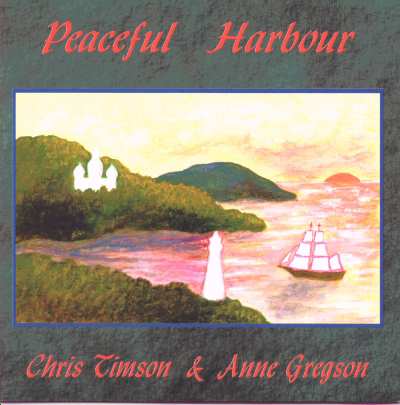 Originally we produced a tape called Peaceful Harbour a couple of years ago (which is still available). To produce the CD we added another seven songs and tunes, and re-mastered the original songs and tunes (in the process re-recording a couple of bits and pieces that we weren't so happy with first time around). We feel that this CD fairly represents us as we are today.

Here are some excerpts from reviews so far received:-

Chris Timson & Anne Gregson have been singing together for some years. They have developed a style with which they are comfortable, a style very much of the early folk revival years with a mellowness which makes this CD very pleasant to listen to. ... Favourites are always subjective, but for me the unaccompanied duets The Dilly Song and Another Year, Chris' rendition of John Pole's Punch & Judy and the instrumental Bartok's Last Stand make the most impression. There is no track however that does not blend with the gentle style of the CD. ... After a few times it becomes a 'familiar friend' and much credit must be given to Chris and Anne. Over the last two months it has been played often in this house.

This bumper reissue of a previously-released cassette gives us 21 tracks of close-harmony singing, solo flights, and a variety of Anglo and English concertina playing, in the midst of which most listeners should find something to whet their appetites. There is the neo-Peter Bellamy style with its dropped Hs*, and there is the melancholy melodic style of the harmonists, and most styles in between, all crisply remastered and brought into the digital age in Doug Bailey's new studio at Wherwell in Hampshire. The album is a credit to all concerned.
* I always thought the dropped Hs were due to me being a cockney! - Chris

... Some excellent songs and pleasant concertina tunes, some jolly, some wistful and many self-penned. The unusual thing about this duo is that they promise 'close harmony' and produce it, rather than the normal folkie's part-singing. I haven't heard its like since an old Welsh harmony group from the '70s called Porterhouse. ... The couple give us Leon Rosselson's World Turned Upside Down, trad songs like Nottamun Town and Rolling Down To Old Maui, a cynical song about education by Timson, Good Morning Sir and some good singalongs written by Gregson.

Chris Timson & Anne Gregson specialise in close harmony singing and their voices blend well. There are seven traditional English and American tracks and fourteen contemporary (eleven by Gregson herself) on this CD. I especially liked the acappella American songs Betty Anne, Another Year and Crawdad Song. Gregson sets sound lyrics to easily-remembered tunes and I can imagine All In Harmony, This Time Again (overdubbed to allow 6 part harmonies) and the title track Peaceful Harbour (two voices, two concertinas, beautifully arranged) becoming club standards.

... Chris & Anne have concentrated on their strengths here. The programme is well-balanced, too. The concertina pieces are generally simple, but varied in style, and with good use of harmony and counterpoint. The vocal harmonies are well-crafted, if seldom surprising. The melody is always to the fore, whoever is taking it. ... Particularly successful among the traditional songs are their performances of The Crawdad Song, Another Year and Nottamun Town. Anne's own songs are often instantly singable, with good choruses. All In Harmony, Sail Away, This Time Again and the title track Peaceful Harbour are, for me, the pick of the crop. They deserve wider circulation.

This Wiltshire-based couple are new to me, but I found this quite varied album most enjoyable. Although Chris and Anne both play concertina their strength lies in their harmony singing and I could have done with more of it. The material is an interesting mix of English and American traditional interspersed with eleven of Anne's own songs, all of which are excellent.

This is another release from the Wildgoose Studios in Hampshire, and features Chris and Anne with English and Anglo concertinas. ... The album first came out as a cassette a couple of years ago, but has now been remastered and some new tracks added, making a very generous 21 in total. Of these there is one, The World Turned Upside Down, by Leon Rosselson, and Punch and Judy by John Pole; the remainder are either traditional or by Anne with one by Chris, Good Morning Sir, which is sung unaccompanied. Among the 11 tracks by Anne are four instrumentals, and of all the tracks these are the ones I particularly recommend. Anne writes a nice tune, so all concertina players, please take note. ... Chris and Anne's sleeve notes are very informative and entertaining, considering their succinctness with rarely more than one sentence per track. All in all quite a mix of contemporary and traditional songs but, for me, the best tracks are the instrumentals.


For completeness, here are a couple of reviews of the original tape:

... The tape is a mixture of traditional songs and some of Anne's own as well as one by Chris. I actually prefer their own songs, When I Come Home, Peaceful Harbour, Sail Away and When It Comes To The Evening are all good and well produced and the final This Time Again is the sort of song everyone will join in with lots of harmonies ... A very pleasant mixture and the tape is worth acquiring, these two singers also provide a good variety of material for folk club performances so listen to the tape and then book them for your club. You won't be sorry.

... Their well developed harmonies are pleasing to the ear and they are to be commended for a very creditable first recording ... Listen especially to the title track, "Peaceful Harbour", my favourite of all Anne's songs. If I were ever to sing anything other than my own compositions I would certainly be singing this. A lovely, haunting melody.

Well, that's it for now. If you want to email us for a chat about songs, concertinas or anything you have seen on this page just e-mail by clicking here, or write to: